What does the ‘Only Good®’ brand (API Consumer Brands, New Zealand) and the ‘Honest Company’, cofounded by actress Jessica Alba, have in common?  They both use sodium lauryl sulfate (SLS) in their products while they proudly claim not to use it.

Please read my article on sodium coco sulfate as it is important to know what sodium lauryl sulfate (SLS) and sodium coco sulfate (SCS) are before continuing. Having read the article you should appreciate that SCS is a mixture of a number of different molecules (different fatty alcohol sulfates), and that the major component is sodium lauryl sulfate, SLS.

The Honest Co. pledged that their products were SLS free and that they would never use SLS as an ingredient.  In her book, ‘The Honest Life’, Jessica Alba describes SLS as a toxin. Being SLS free is an important product distinction, as shown by their own claims not to use it, and such claims clearly should not be false and misleading. However an investigation by the Wall Street Journal revealed that SLS was in Honest Co. products, and that this was due to the company using SCS as an ingredient.  Honest Co. finally withdrew SCS from its product range, but only after a lengthy and vigourous defence of SCS by the company.

Here are some of the explanations Honest Co. provided in defending their use of SCS.  I list these explanations/excuses as companies that deceive their customers by having SLS in their ‘SLS-free’ products typically don’t come clean when exposed. They just keep on being deceptive and misleading.

1)    We never added SLS to our products, we added SCS.
But SLS is necessarily, and without exception, a major component of SCS.  Any company using SCS should have this knowledge, if they don’t they shouldn’t be formulating health care products.  So much for the Honest Co. claim that “The science of chemistry is the foundation of making products - so we live and breathe it at Honest”.

If you say that you don’t have SLS in your products you cannot use SCS as an ingredient.

2)    SLS and SCS are not the same thing.
True, but irrelevant. SLS is a single fatty alcohol sulfate (sodium lauryl sulfate) while SCS is a mixture of fatty alcohol sulfates, a mixture that always includes SLS as a major component.  So they are different but the point is that SCS always contains substantial quantities of SLS.

3)    The CAS number for SLS is 151-21-3 and the CAS number for SCS is 97375-27-4 so they are two distinct chemicals.
This is just a more technical version of the preceding explanation. SLS and SCS are not identical compositions so they are assigned different unique numerical identifiers (CAS numbers), but the point remains SLS is a major component of SCS.

4)    SCS can only be made from raw coconut oil, while SLS can be refined from many raw materials, including palm oil or petroleum.
A statement meant to distract from the real issue.  How SLS and SCS are made is not relevant to the fact that SCS always contains SLS as a major component.

5)    We never tested our SCS to see if it contained SLS.
Firstly, you don’t have to test the SCS, you just have to have an understanding of how it is manufactured to appreciate that SCS always contains SLS as a major component. Formulators of health care products should have this knowledge, particularly for a key ingredient.

And you would think that Jessica Alba’s company, which has been valued at 1.7 billion dollars, would find the money to do some simple tests to ensure their products did not contain the toxin (her own words) that she swore to avoid.

6)    The testing laboratories that found SLS in our products were mistaken.
Independent analyses were done by two accredited laboratories using approved standardised procedures for detection of SLS.  Both laboratories were in agreement that Honest Co. products contained substantive quantities of SLS. The amounts of SLS were described as being similar to competitor products that used SLS as a declared ingredient.

These analytical results were entirely consistent for a product that has SCS as a declared ingredient.

7)    Honest Co. analytical testing did not find any SLS, only SCS.
When the Honest Co. finally got around to doing their own tests after being challenged they claimed that their “rigorous testing” did not find any SLS in their products.   Failing to find any SLS is totally at odds with the results of the independent laboratories. And we can see how Honest Co. tried to give themselves an out through their play on words - they detected only SCS.  But SCS is just a label for a mixture of fatty acid sulfates, of which SLS is invariably the major component. To say that you ‘only add SCS’ or ‘only detect SCS’, and so by implication there cannot be any SLS present, are weasel words of the highest order.

Galaxy Surfactants Ltd (India) manufactured the SCS.  As you can see from their product document SLS (C12) is, as expected, the predominant component (52-58%). 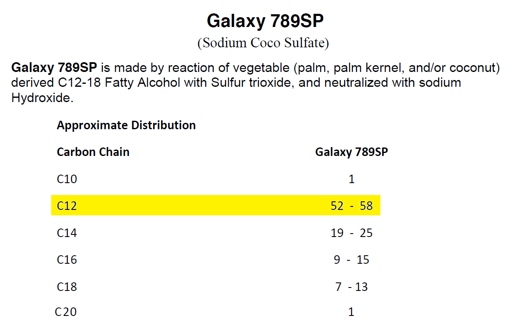 The SLS was supplied to Trichromatic West Inc (USA) who then documented the ‘SLS content’ as zero simply because they hadn’t added any SLS!  Unbelievable.  Firstly, no one adds SLS to SCS, it already comes loaded with SLS as a consequence of the manufacturing process. And, by analogy, this would be like taking full cream milk and then, on the basis of not adding any additional cream to it, describing it as zero-cream milk. And then charging a premium for that cream-free milk!  Trichromatic West described the SCS they supplied as “fairly and honestly represented”. The reality is just the opposite.

Trichromatic West then supplied the SLS to Earth Friendly Products LLC who, in turn, manufactured the products for Honest Co. along with passing on the ‘zero SLS’ documentation.

So were the people at Honest Co. innocent dupes fooled by dodgy documentation?  No.  Firstly, SCS always contains SLS and any company promoting SCS as a superior ingredient would have this basic understanding. Secondly, after it was pointed out to Honest Co. that their products contained SLS instead of admitting their mistake and correcting it they embarked on a long, and disengenuous, defence of SCS and of the certification that it was SLS free.

Unless it is determined who requested the SLS-free document, and when and why, it is hard to determine exactly where all the blame might lie. I have analyzed a number of products over the years and have often found that supplied certificates do not match the analytical results. You very much get the feeling that bogus certificates can be handy for fobbing off pesky inquisitive members of the public.

Given that not having SLS in their products was a central claim of Honest Co., and that they described SLS as a toxin, you would think they would have exercised due diligence and tested for it in their products.

Here in New Zealand the Only Good® range of hand and body wash products are advertised on their website, and on their product labels, as being 100% natural, sulfate free, and free of SLS.

Their slogan “clear conscience nutrition for your skin” is a remarkable display of duplicity for a company that clearly has no conscience when it comes to making false claims and misleading its customers.  API Consumer Brands, who have the Only Good® Brand, and who pride themselves as “New Zealand's Leading Innovator in Healthcare, Pharmaceuticals and Toiletries” and as “one of New Zealand’s leading pharmaceutical companies” needs to operate with more integrity.

I contacted API Consumer Brands a year ago to point out that there was SLS in their products. Their response was that their products contained SCS, not SLS, and that SCS and SLS even had different CAS numbers (and so by implication SLS cannot be in a product that has SCS added to it).  The very same excuses recently trotted out by Honest Co.  A year later and the Only Good® web pages still make the same false and misleading claims. 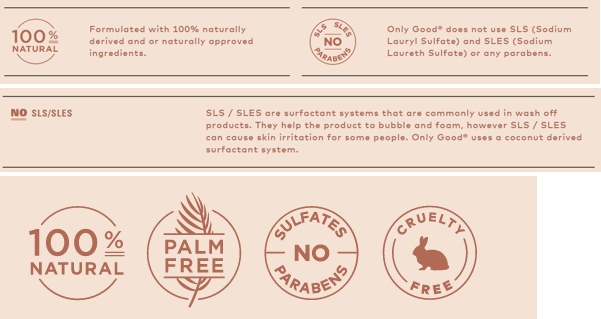