Because we make natural soaps we are sometimes asked about synthetic detergents, and recently in particular about sodium coco sulphate. Before describing sodium coco sulfate I will talk a bit about sodium lauryl sulfate as the two are closely related.

SLS belongs to a class of medium to strong surfactants (or 'surface active agents') known as the alkyl sulfates. As a group these chemicals have a market advantage of strong cleansing power, high foam production (which people equate with better cleansing - though foaming and cleansing are two quite different things) and very low production cost. Unfortunately they are also skin irritants, in part because they remove protective oils from the skin. In fact sodium lauryl sulfate is something of a gold standard for producing irritation in skin irritation studies.

SLS can be made either from petroleum oil (via the OXO process) or from coconut or palm oils (via the Ziegler process). Both processes involve a complex sequence of chemical reactions for attaching a sulfate group to a long carbon chain molecule (see Figure 1).

With coconut oil as the starting material the coconut fatty acids are converted to fatty alcohols and these alcohols are then sulfonated with sufur trioxide or chlorosulfonic acid. Companies sometimes promote their pseudo-natural cosmetics with the explanation that the SLS they use is derived from coconut or palm oil (“plant-derived”), as if this somehow makes it more natural. But SLS is not natural, it is a synthetic chemical that is not found in nature. 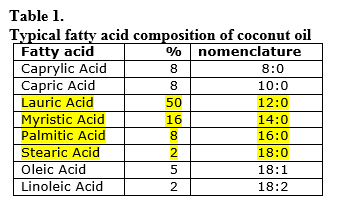 In summary: sodium coco sulfate contains SLS as a predominant component, with all the concerns that are linked to that chemical. Basically it is just another way to hide SLS in formulations with yet another name. Both sodium coco sulfate and SLS are synthetic detergents and should never be part of any natural cleanser. Natural products that are kind to your skin, and environmentally friendly, will not contain lauryl sulfate, laureth sulfate, coco sulfate or any of the long list of other synthetic detergents.

Although the marketing term ’coco sulfate’ is used to indicate it is derived from coconut oil it is also made from palm oil. Increasingly people are saying no to palm oil because of deforestation and the destruction of habitats containing rare and endangered species. And certificates of sustainability mean little if the forests continue to disappear. Unfortunately manufacturers can use palm oils to make products like SLS and SCS without the consumer being aware, and while they may declare there is no palm oil in their products the ingredients they use may have been made from palm oil fatty acids.

There are companies that explicitly declare their products to be SLS free while using SCS as an ingredient! Examples of this are the 'Honest Company', co-founded by actress Jessica Alba, and the New Zealand brand 'Only Good' by API Consumer Brands.